Mhani Gingi Social Entrepreneurial Network is honouring National Women’s Day, 9 August 2020, by celebrating the outstanding leadership of the women working with the organisation to provide sustainable livelihoods for vulnerable groups.  Among them are five remarkable women who help to drive Mhani Gingi’s initiatives to combat food insecurity among marginalised communities during COVID-19.  This is being done through three soup stations Mhani Gingi is overseeing in Cape Town. The food is generously donated by Ladles of Love and others who also tirelessly look for food donations from other individuals and organisations. 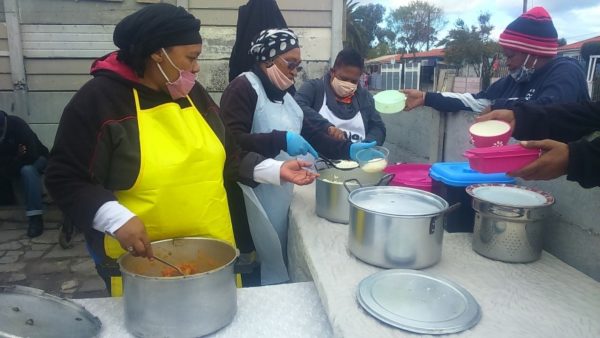 A nutritious lunch being served by Delicia Kiewieto and other partners of Mhani Gingi to the community in Azalea Street, Uitsig, Cape Town, on 4 August 2020. This soup station catered for 260 people on the day, including adults and children.

She is assisted by Nursery Assistant, Vuyisa Tekwana, who has been able to acquire a home and support her two children through employment at the Nursery since Mhani Gingi’s inception 15 years ago. Team leader, Vanessa Baadjies, serving food and porridge to the children and adults at the Wendy Park service point in Uitsig in July 2020.

The three Mhani Gingi soup stations helping to meet the expanded need for food resulting from the COVID-19 lockdown are a continuation of the usual work of Mhani Gingi and these remarkable women, to alleviate poverty in vulnerable communities in Cape Town.  Mhani Gingi will feature their stories throughout Women’s Month 2020 in South Africa.  The holistic Mhani Gingi approach is well illustrated by the involvement of the women social entrepreneurs in the propagation of seedlings, right through to the delivery of nutritious, cooked meals directly to hungry people on the streets of our communities.

Members of the team of remarkable women and men serving meals twice a week in the Uitsig-Ravensmead area.

Using what they have

“These women are not waiting around for someone or something to come and help them to solve the problems in their communities,” said Lillian Masebenza, Founding Director of Mhani Gingi, who is an award-winning social entrepreneur and an Ashoka Fellow.   “These women take the initiative and ‘use what they have’ to help to solve problems and meet the challenges in their communities.  This has always been the approach that Mhani Gingi advocates.  Mhani Gingi doesn’t just talk; we walk the talk.”

Each soup station feeds about 200 people – and often more in Uitsig Community – twice a week, amounting to about 1 200 hungry people being fed per week by Mhani Gingi.  The name ‘Mhani Gingi’ is taken from the Shangaan words for an industrious woman.  “We also want to take this opportunity to thank Ladles of Love for the generous donations of the food, making it possible for Mhani Gingi to feed hundreds of vulnerable people every week,” added Masebenza.