A  group of 25 beneficiaries of Mhani Gingi Social Entrepreneurial Network who live in Uitsig Community in Cape Town is preparing and delivering much-needed food to hundreds of people in their community in Uitsig and Ravensmead. 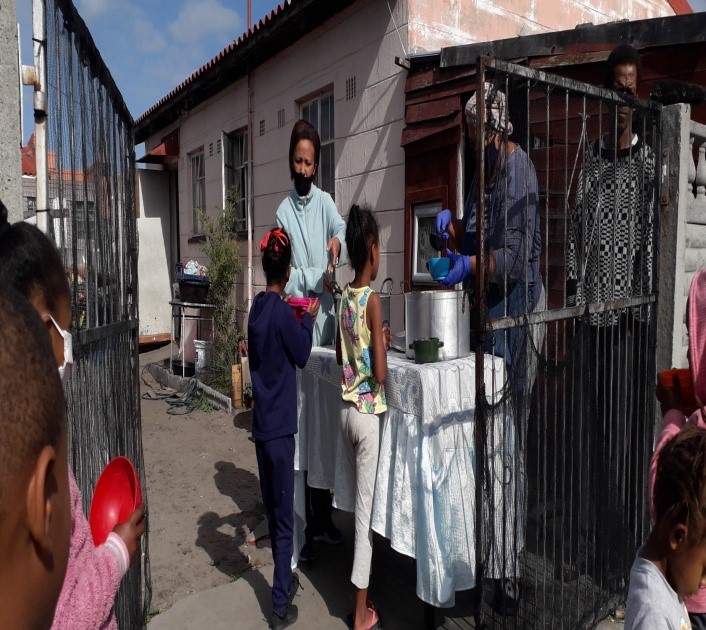 The Uitsig group serving a meal at a new service point in Burren Close, Connaught Estate, in Cape Town in July 2020.

The group of people with physical disabilities from Uitsig Community, some of whom are in wheelchairs, are preparing food in seven of their homes.  The Uitsig group then serve  nutritious meals twice a week at service points in Azalea Avenue, Aster Avenue, Geranium Avenue, Thebus Way, Myrtle Road and De La Rey Street in Uitsig; Wendy Park in Ravensmead; and at a newly established distribution point at Burren Close in Connaught Estate. 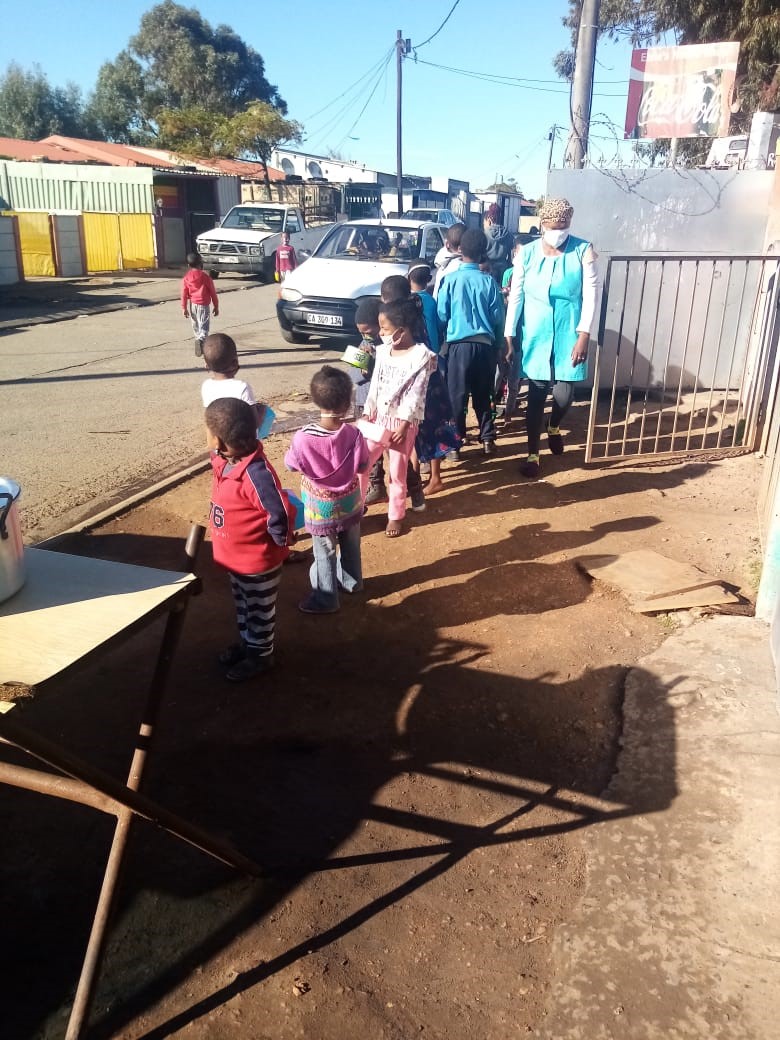 The scene at the Aster Avenue soup station in Uitsig one morning in July 2020.

You wouldn’t believe the need in Uitsig, according to the team leader, Vanessa Baadjies.  “In just one road, Myrtle Road, we served more than 200 people,” Baadjies said.  The numbers fluctuate when children attend school. 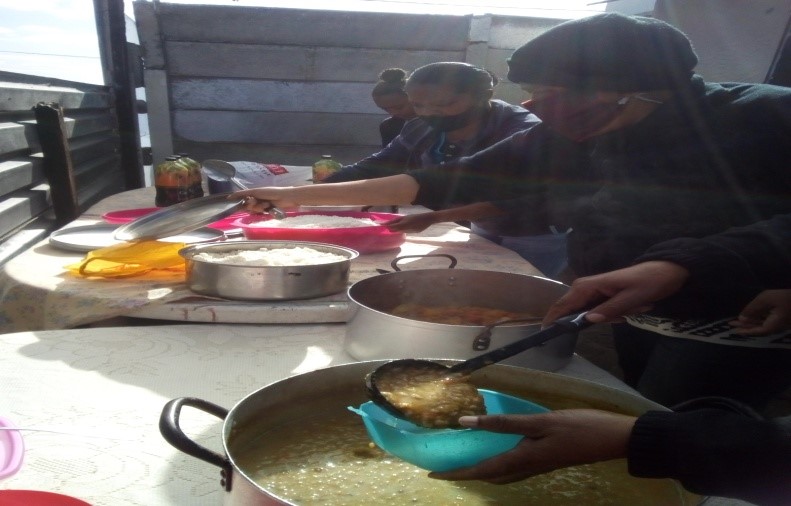 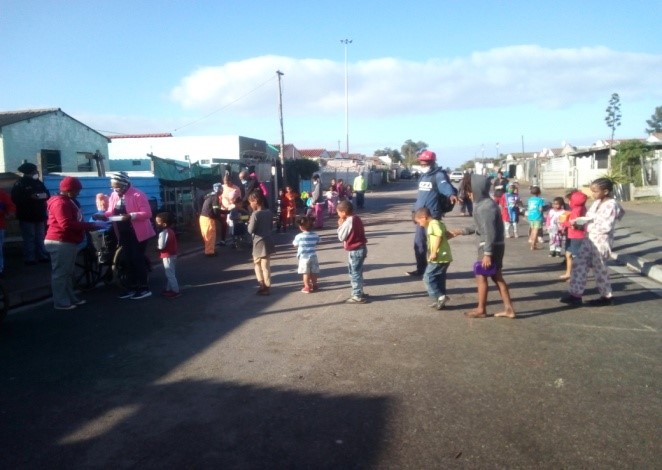 Maintaining social distance in the queue for food at the service point in Myrtle Road.

Under the supervision of Mhani Gingi Organic Herb and Vegetable Seedling Nursery, the Uitsig group maintain two community food gardens – one situated at Uitsig Primary School and another at the Uitsig Community Centre.  They also make crafts at the community centre but cannot work or cook there presently because of the COVID-19 lockdown restrictions.

The need for food in the Uitsig area of Cape Town is exacerbated by poverty and various social and health challenges which include unemployment and a high incidence of tuberculosis (TB) infection. The situation in Uitsig has worsened for residents because of job losses that have resulted from the COVID-19 pandemic as well as hunger resulting from children not attending school where they usually obtain meals, Baadjies said. 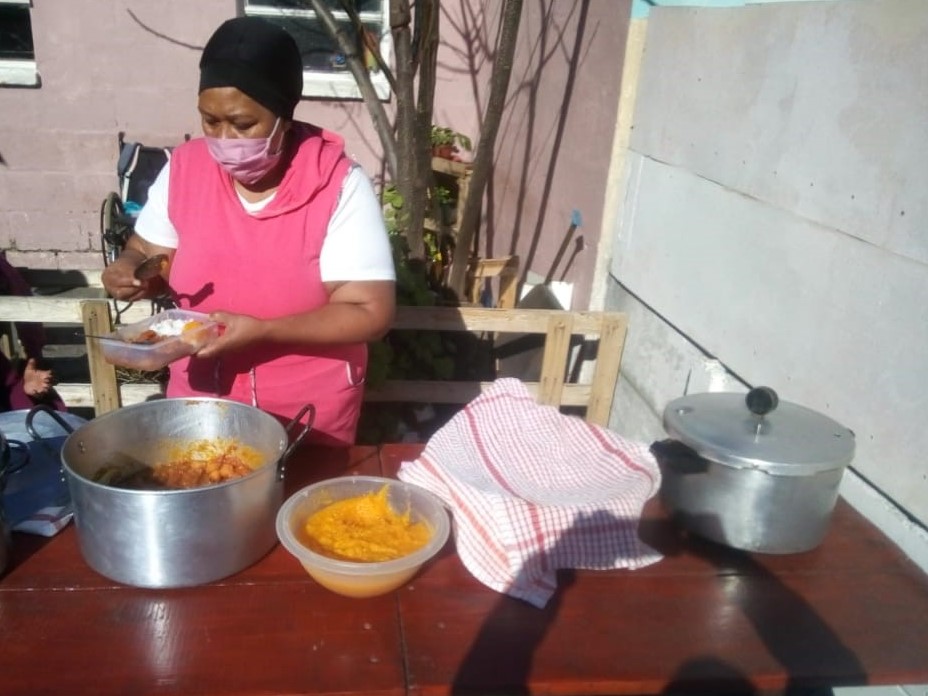 Serving a healthy meal at the Eureka service point in Thebus Way, Uitsig. 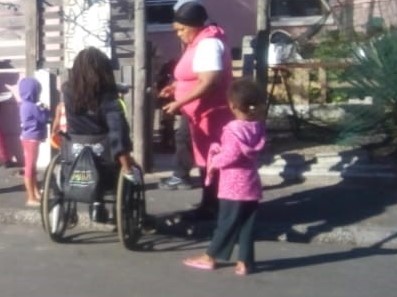 The queue for food at the service point in Thebus Way, Uitsig.

In the second week of July 2020, the Uitsig group served about 150 members of the Uitsig community, children and adults, with porridge, soup, food and cool drinks at two service points, in Myrtle Road and at the new point that was begun in Burren Close, Connaught Estate.  About 50 of these recipients were children.

“We served a total of 150 members of the community at both service points, thanks to the great support from Mhani Gingi,” said Baadjies.  “We are ever grateful to Mhani Gingi for enabling us to serve our various communities.” 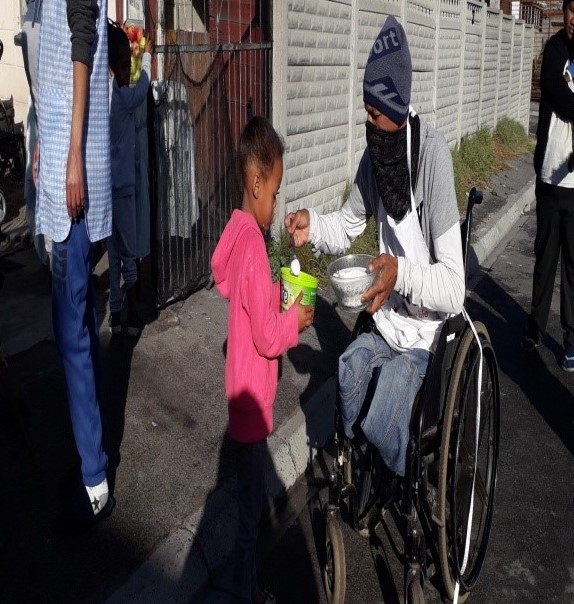 A member of the Uitsig group serves food to a child in Burren Close.

In the same week, a large number of children were served food in Thebus Way, Azalea Avenue, Geranium Avenue and Aster Avenue.

Mhani Gingi has received supplies of food as well as donations of kitchen equipment from the Ladles of Love organisation since May 2020.  These donations supplement the efforts of Mhani Gingi’s four Soup Stations which are situated in Uitsig Community, Athlone/Mannenberg and Retreat, and each feed about 200 people twice a week.  In total, about 1 600 nutritious meals are served in vulnerable communities by Mhani Gingi per week. 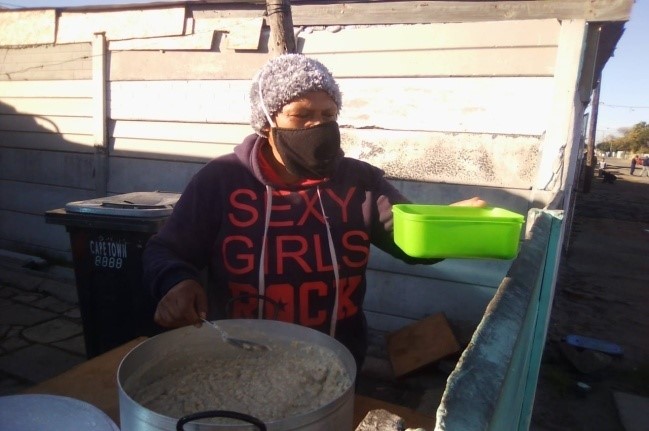 A nutritious meal being served by a member of the Uitsig group in Azalea Avenue, Uitsig, in July 2020.

The latest donation from a member of the public through Ladles of Love has added another 860 meals a month to the capacity of Mhani Gingi’s community food kitchens. The soup stations are a continuation of Mhani Gingi’s daily activities which promote food security and healthy nutrition among vulnerable communities through community gardening.

Lillian Masebenza, Founding Director of Mhani Gingi, points out that in the Uitsig area of Cape Town where the Uitsig group of beneficiaries live, there is a high prevalence not only of crime, but also multiple drug resistant (MDR) TB.   “Most of these beneficiaries take chronic medications for various ailments, and they cannot take these medications on empty stomachs,” said Masebenza.

“Also, because many children have not gone back to school due to the lockdown, they have no access to decent meals,” Masebenza said.

The Mhani Gingi Soup Station initiative enabled these children in Uitsig and other vulnerable children in Mannenberg and Retreat to have access to nutritious meals, Masebenza said.  The Soup Station in Retreat is operated at the Blouvlei School for Learners with Special Needs (LSN).

“Not only do the donations help Mhani Gingi fulfill our wish to be inclusive, but also being in line with the pledge that supports the United Nations Sustainable Development Goals, being ‘Leaving no-one behind’,” Masebenza added. 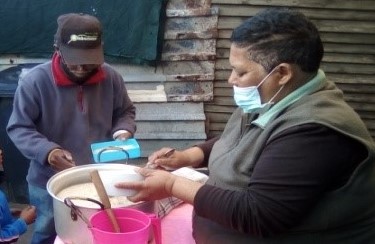 Serving a meal at the service point in Wendy Park, Ravensmead.

The Mhani Gingi Centre of Social Entrepreneurial Excellence, which is situated together with the Mhani Gingi Nursery at the Saartjie Baartman Centre for Women and Children in Athlone, Cape Town, showcases innovations that enable persons with disabilities to participate in urban gardening from their wheelchairs.

The team from the Uitsig group serving a meal to the community in Geranium Avenue, Uitsig, in early July 2020.

Certificates honouring projects that contribute towards women’s empowerment in the environmental sector were presented at a Networking Dinner held at the Ingwenyama Conference & Sports Resort. 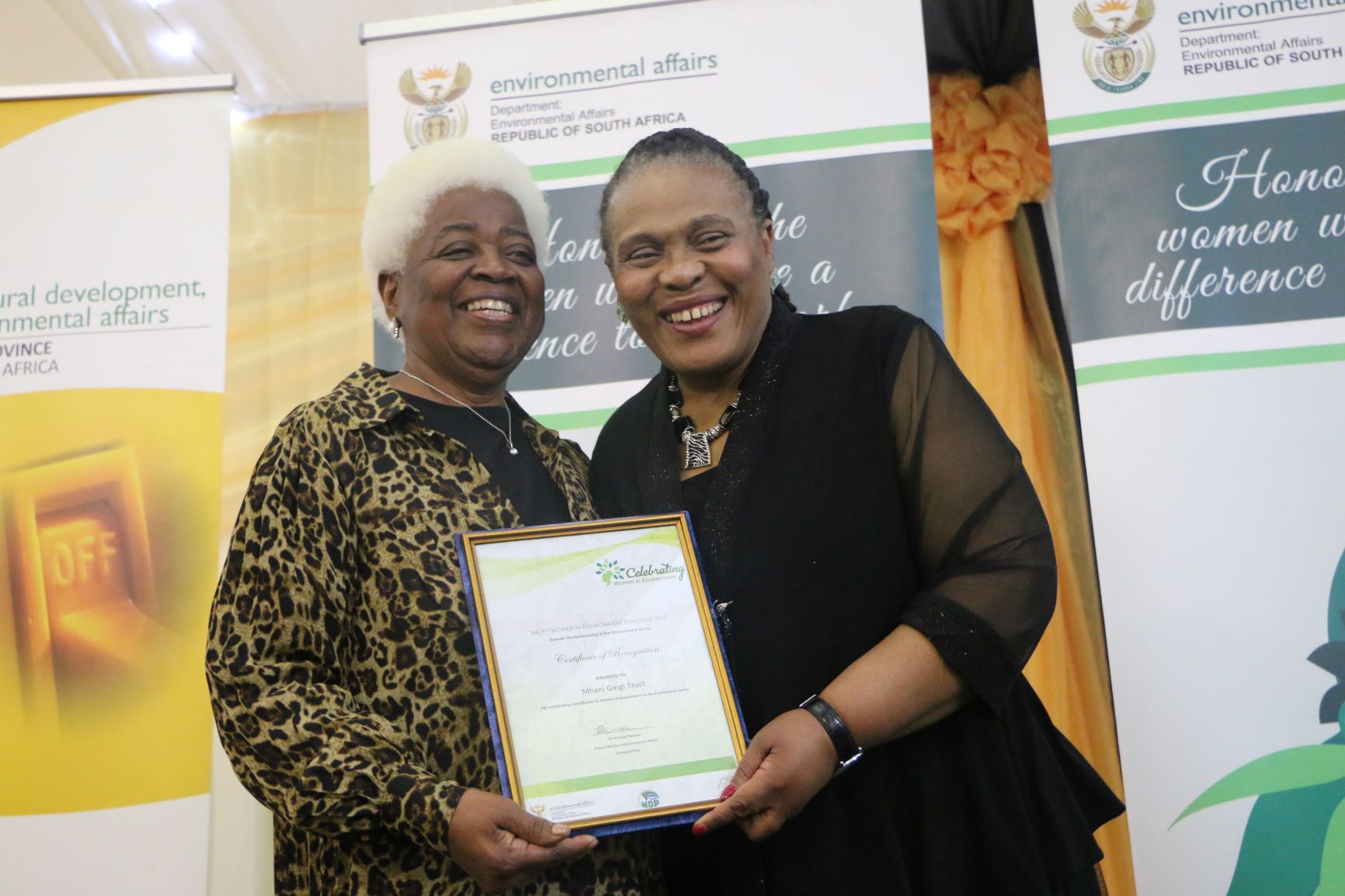 Founding Director Lillian Masebenza at the Mhani Gingi exhibition at the Women in Environment Indaba. 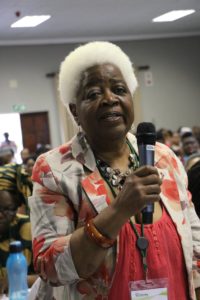 Mhani Gingi Social Entrepreneurial Network has been recognised for qualifying as a top gender empowerment organisation.  The award was made by the Top Women in Business & Government publication which recognises those companies demonstrating the greatest commitment to – and achievement in – workplace equality.

“We feel honoured,” said Lillian Masebenza, Founding Director of Mhani Gingi Social Entrepreneurial Network, on being recognised as a leader among gender-empowered businesses.  “To us it is very important to empower women so that they can improve their livelihoods.  For this they need self-esteem which comes about from coaching and mentoring,” she said.

Mhani Gingi is dedicated to helping women and youth to create sustainable livelihoods for themselves.  To achieve this Mhani Gingi delivers tailor-made training solutions and provides mentoring and support that enables women and youth to engage in income-generating activities and create viable businesses through social entrepreneurship.

The 2016 Top Women in Business and Government survey researched more than 7 000 companies in South Africa to prepare a ranking and benchmarking report.  A little over a quarter of the companies qualified against the criteria.

Gender equality is good for business

“Compelling research supports the idea that the employment and empowerment of wom(e)n in any business is beneficial for that organisation,” said Top Women in Business and Government on announcing the awards.

Lillian Masebenza, Founding Director of Mhani Gingi Social Entrepreneurial Networks, has won two awards in the 2015 Africa’s Most Influential Women in Business and Government Awards made by CEO Communications.  The awards recognises titans on the continent for the meaningful contribution they have made in their industry and the positive impact this has had on their country.

Lillian was announced Winner for South Africa and Regional Winner for the SADC (Southern African Development Community) region in the category of Education & Training: Private at a function in Johannesburg on July 28 2015.

As a social entrepreneur, Lillian facilitates tailor-made skills training to empower women and youth to perfect to competitive levels their products and services in the market place.  She then links them to funding and marketing opportunities.  Lillian’s holistic approach and the business model she has developed not only addresses economic issues but education, health, human rights and gender equality, while also promoting self-esteem and social cohesion.