Mhani Gingi Social Entrepreneurial Network, together with partners the 1.6 Million Club Sweden and Yennenga Progress, hosted a Family Unit Participative Conference in Cape Town from 17 to 19 August 2017 that drew together about 30 entities over three days to co-create a solution to feed into the strategy to be used in ongoing efforts directed at preventing the violation of the rights of women and children.

The initiative was aimed at promoting the health and safety of women and children, eradicating gender-based violence and strengthening the family unit.  It brought together existing service providers and organisations working in areas with high contact crime rates, government and political entities, participants from communities, and experts, with the objective of creating safer communities and forming a united voice against the violation of the vulnerable.

“The problems of violence in our society necessitate the need for a holistic, integrated and inclusive project to highlight the importance of the functional Family Unit.  This is a big challenge in that many ‘families’ are child-headed,” said Lillian Masebenza, Founding Director of Mhani Gingi Social Entrepreneurial Network.

“This project’s focus is a holistic and integrated approach, making the Family Unit, in whichever form, its point of departure.  Its strength will be on networking with existing services, organisations, political leaders and other entities already functioning within these areas to come together as one voice against violation of the rights of women, children and the vulnerable.”

For 14 years Mhani Gingi had focused mainly on women, youth, children at Early Childhood Development facilities, as well as on People with Disabilities (PWDs).  An additional focus would be a proactive approach to preparing soon-to-be or new fathers and men in general to understand their roles and take up the responsibility to care for and protect their children and the mothers of their children, Masebenza said. 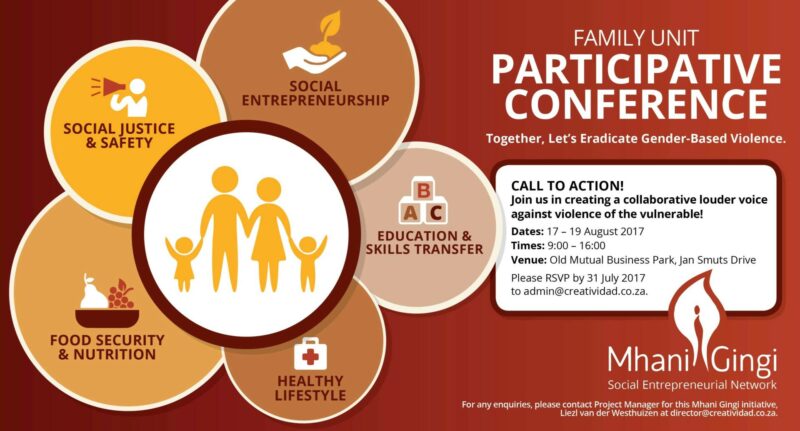 Safe communities and protection of the vulnerable

On 17 August, speakers from the different thematic sectors highlighted current realities.  Discussion focused on current efforts and the way forward to ensure safe communities and protection of the vulnerable.  On 18 August, capacity-building sessions were facilitated by selected non-governmental organisations.  There were also Round Table Collaborative Strategy discussions among stakeholders within the different thematic sectors to come up with a draft action plan for a collaborative effort to address the challenges.  The final day, 19 August, included an inter-faith prayer circle.

Various organisations participating in the conference included non-governmental organisations working within the sectors of social justice, prevention and reduction of abuse and domestic violence; sexual and reproductive health programmes; services engaging men and boys; those equipping parents of children living with disabilities and persons who are differently abled; as well as organisations focusing on the family unit.

“Mhani Gingi wishes to contribute to enhancing the role of duty-bearers, community leaders, other non-governmental organisations also involved in this plight, government departments and service providers to improve the human rights and safety situation in the Western Cape.  The focus will be on uniting women from different backgrounds to ensure a renewed emphasis is placed on women’s health, restoring their dignity, empowering them economically and ensuring the safety of the vulnerable within our fragile communities,” said Masebenza.

The participative conference encouraged interaction between audiences and speakers so that discussions lead to implementable, co-created solutions and collaborative outcomes.  Important to note is that the work of this project will be ongoing towards establishing a programme, Masebenza said.

Alexandra Charles, Founder and President of the 1.6 & 2.6 Million Club, addressed the Family Unit Participative Conference on how she built one of Sweden’s largest non-profit women’s organisations.  Carin Götblad, Regional Police Commissioner in Police Region Central, Uppsala, Sweden, and for two years a National Co-ordinator Against Domestic Violence, was another speaker.

Networking to prevent abuse of women and children

Claudia Burger, Programme Director at Activists Networking against the Exploitation of Children (Anex), addressed the subject of the influence of abuse on the family unit.  Aneleh le Roux, Training Manager at Christian AIDS Bureau for Southern Africa (CABSA), introduced the global campaign of Thursdays in Black initiated to combat rape and violence.

Another participant in the three-day conference was poet, playwright and performer, Malika Ndlovu, guest curator and presenter for BadilishaPoetry.com and a founder member of the Cape Town-based women writers’ collective, WEAVE.

Researcher for the Safety and Violence Initiative (SaVI) at the Institute for Safety Governance in the Global South at the University of Cape Town, Giselle Warton, was among speakers.  Warton is also content manager of SaferSpaces, an online knowledge-sharing and networking portal for safety and crime prevention practitioners.

Another expert speaker was Dr Veronica Svedhem Johansson, Senior Consultant in the Department of Infectious Diseases at Karolinska University Hospital and Director of the Swedish HIV National Quality Assurance Registry.  Mark Kleinschmidt, Anglican Lay Minister and Ward 60 Councillor for the City of Cape Town, served as master of ceremonies on the first and last days.

The 1.6 Million Club Sweden, which raises awareness around women’s health and lifestyle issues and lobbies for fair, gender-based, medical research, funded the initiative together with Yennenga Progress, an organisation serving as an accelerator for development.