“A studio with a passion for clay and empowering women”
Compiled by Addison Mauck, intern student at Mhani Gingi during 2017

In 2011, Mhani Gingi Social Entrepreneurial Network partnered with Mathilda Fourie of Fettle Fox Clay Studio to train women in the design and creation of ceramics and pottery and how to sell their creations at local markets and to interested buyers in the Cape Town area.

The main objective of the programme was to empower women by teaching them the art of ceramics, in addition to marketing and business skills, while paying them a stipend to support their living costs while involved in the programme.

The Fettle Fox Clay Studio officially began in 2011, although discussions about the potential for this project took place two years prior to that, after a conversation between Lillian Masebenza and Mathilda Fourie’s husband, a friend of Lillian’s who frequently worked for Mhani Gingi as a cameraman.

Once the project began, four women were selected by Mhani Gingi to undergo daily training from Mathilda Fourie and her training partner in her home studio in Cape Town. During this time the group began to sell their clay products at local markets and to accept commissions, most notably from the Cape Grace Hotel. The women worked full time for one year and a half and then, as funding slowed, they began to work only two days a week.

The programe came to a close in 2013 when funding to support the project ran ceased. Recently there have been conversations about the possibility of calling upon the former participants to re-establish the pottery studio in the Mhani Gingi Trust House established in 2016 in Nyanga, but as yet this has not occurred.

The funding received for the project was used to provide clay, tools, and other materials needed for the creation of the products as well as to cover the stipend for participants. Each of the women was paid a small daily amount to cover transportation costs and food.

Mhani Gingi selected the women who participated in the programme from their network members. Four women were the main participants over the duration of the programme. The profiles below are printed with permission from the Fettle Fox Clay Studio Facebook page (https://www.facebook.com/Fettle-Fox-Clay-Studio-420963731331091/). 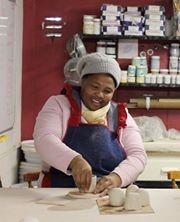 Originally from the Eastern Cape, Mpumi now lives in Lower Crossroads with her husband and three children. A committed Christian, her main passion is gardening – she likes nothing better than to plant vegetables and to see flowers grow from her efforts. She’s recently taken her love of working with her hands to the ceramics studio where, as a total beginner in stoneware, teacher Thalea has branded her ‘a natural talent’. She’s currently learning how to make letters of the alphabet and herb garden markers in the shape of birds.

Originally from the Eastern Cape, Noma has lived in Lower Crossroads for three years. With four children of her own and three foster children, of ages ranging from 6 to 23 years, Noma has a strong motivation to find employment to put food on the table. In 2006 she started making necklaces, scarves, earrings and brooches to sell but realised that she needed a greater variety of skills to generate a decent income. This ultimately led her to join Mhani Gingi’s ceramics project in 2012. Her ambition is to set up a studio in Lower Crossroads to impart skills to younger, disadvantaged women. Currently Noma is enjoying perfecting her technique of making soap dishes and small bowls and sometimes finds it difficult to part with her products because she likes them so much.

Monique Mohamed is 39 years old and was born in Cape Town where she still lives with her two children. The last two years she has lived in Delft. Monique finished 11 years of schooling. She always dreamed about becoming an artist, but has never got so far. She has a passion for planting vegetables and flowers. Every Tuesday she goes to the church in Observatory where she attends Sun Shide Leader for mothers and babies. The women do needle work, beading and so much more. It was Monique’s Sun Shide Leader who told her about Mhani Gingi and the ceramic project. “Now I am learning how to make bowls, letters from the alphabet and much more at Fettle Fox Clay Design.” She finds it difficult, but she loves it. She especially likes working and creating things with her hands. Her experience has taught her to keep learning and not to stand still.

Ntsiki Katase was born in Cape Town in October 1979. She went to school in Gugulethu and completed Grade 11. She never had the chance to proceed to tertiary level. Ntsiki is hoping to gain her matric. Ntsiki is single and has no children. Three days a week she works at Fettle Fox Clay Design, a part of the Mhani Gingi network. She loves what she is doing and has a really good and friendly relationship with the other women she is working with. Her dream is to learn more about pottery so that she one day can see herself somewhere.

The main partners in the project were Mathilda Fourie and her home studio, Mhani Gingi, the funders, the Cape Grace Hotel, and the markets where products were sold.

Four women worked in the programme from start to finish. In addition to being taught extensively about the design and creation of ceramics, the women were taught ways to ensure quality in their products and about the dedication needed to meet deadlines for orders. They also gained skills in marketing their creations and learned how to display and sell items at markets. The women worked full time, every day, for one-and-a-half years. As funding began to run low, the women worked for only two days a week.

Fettle Fox Clay Studios was commissioned to design multiple products for the Cape Grace Hotel, namely a series of Christmas decorations and sets of Ndebele salt and pepper shakers. More than 70 sets of the salt and pepper shakers, including a custom stamp of the hotel logo, were made for the hotel to give its patrons. Each of the women designed a set of shakers, then one was chosen to be made into a mould for the final product.

Other products made by the women include small bowls, garden stakes, mosaic tiles and ceramic letters. Some products were made from hand, while others were slip cast. Products were regularly sold at markets throughout the Cape Town area, most notably the annual pottery market in Rondebosch, which is very competitive to participate in. Additional venues included the Franschoek Flower Show. Fettle Fox took advantage of its partnership with the Mhani Gingi Herb and Seedling Nursery to create ceramic planters, in which they planted herbs from the nursery and sold them at markets. The profits made were divided between Mhani Gingi and the studio in order to generate continuing funding for the project.

Currently, none of the women is working in pottery. They keep in contact with one another.

There are plans to revive the pottery activities at the Mhani Gingi Trust House in Nyanga or elsewhere so that these capable women will be able to resume the great work they were doing in clay.