Sandra was born into a family of twelve in Zimbabwe and started selling her home-made crafts from an early age. She learned how to use a sewing machine and after purchasing her own, was able to form her own business and employ two ladies in her own shop. She moved to South Africa with her husband and three children in 2009, settling in Parow, Cape Town. Sandra started making placemats, tablecloths, table runners and aprons at home to sell at the Hermanus market, overcoming the challenges of a foreign marketplace. She is hoping to find a central space in Capetown with good transport links to sell her products. She enjoys making and selling placemats, especially ones incorporating the Big 5 animals because they are uniquely African. She says it is fun to help pick the right story for each customer’s table. Sandra’s advice to women in similar circumstances is this: ‘Fear blocks us from achieving our goals….you have to go through some hardship before you can achieve.’ After realising her entrepreneurial talent relatively late in life, Vuyelwa has been making up for lost time by taking opportunities when offered to her and running with them. In 2006, while sewing clothes such as pinafores and tops from her home in Gugulethu, she met Lillian Masebenza who encouraged her to take a business skills course. After her attendence, she was then inspired to form a money-lending initiative of 30-50 women in her community, under the Mhani Gingi umbrella. Each woman deposits R50 for materials used to make their own clothes to sell. Vuyelwa has also branched out into making necklaces and bags, which she finds easier to market, and she enjoys teaching her skills within her community. Ultimately, Vuyelwa’s would love to have a factory floor for working, selling and learning/teaching new skills. She keeps busy by helping her three children and four grandchildren, as well as helping those who are less fortunate. She is said to have a quiet soul and a ‘heart of passion.’ Her advice to women in similar circumstances is as follows: ‘It’s not easy working for yourself but you have to keep the faith that you’ll be successful. It’s important not to copy or compare with others – you have to do what’s right for you. There’ll always be ups and downs but be strong that you’ll reach your place.’ 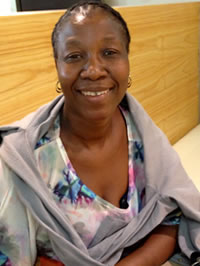 Gladys is a single mother who used to work for a design company. However, with the support of her former boss, she decided it was time to leave her job and begin a new career. Gladys started a successful bed and breakfast in her home in Gugulethu, which is frequented by tourists exploring the community. Gladys is also skilled at making unique jewellery from recycled magazines, and uses the B&B both as a workshop and a marketplace. She chooses colourful sections of the magazine, rolls it up and dips it in varnish, and then leaves it out in the sun to dry. These unique, beautiful beads are her trademark! Because there is a high unemployment rate in Gugulethu, Gladys holds beading workshops for other members of the community and tourists alike. 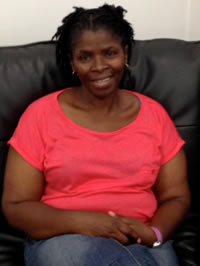 Nosisa is originally from the Eastern Cape, where her mother taught her how to sew and bead. She is divorced from an abusive husband and has two children, and calls herself a survivor who refuses to give up. In 1997, she decided to start working for herself, and made jewelry, dolls, placemats, key holders, and Christmas decorations using an ice cream box full of donated beads and materials. With the help of Mhani Gingi, Nosisa learned the entrepreneurial skills necessary to be successful, and was rewarded with sponsorship from Transnet. She now sells at Kirstenbosch Craft Market and the Country Craft Market in Somerset West. 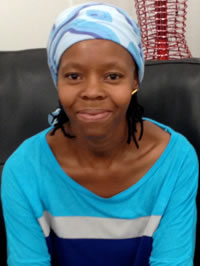 Living in Nyanga, Rita is in her own words ‘a fighter, a dreamer, and a visualizer,’ who loves what she does for a living, and even more that she is able to support her family through doing it.
After attending a beadwork course in 2008 she started to make earrings at home, and was able to expand her skills to create shoes, belts and headbands. Her idea for the beaded shoes came from a dream that she decided to act upon, and are now her favourite product to create. She enjoys coming up with different designs for each pair and seeing them worn at cultural events.
She sells her products at home, schools, outside malls and within her community, often on credit. For the future, she would welcome more opportunities to sell her products and market herself, and her big dream is to have her own shop where all her wares could be displayed.
Married with two children, Rita has overcome adversity to be where she is today, losing a lung to TB in 2009. She draws on the support and strength of other women in her community and has started teaching those interested in her skills, finding fresh inspiration in their creativity and ideas. 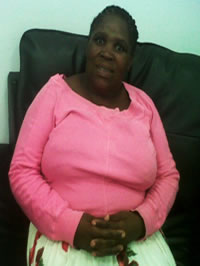 Esther’s introduction to textiles was in 1993 when she was recruited by her sister to work with her and seven other women at a design company. Together they created waistcoats, cushion covers, placemats and tablecloths.
In 2008 she drew upon the skills she had learned in previous years and began once again to work with fabrics, this time from home. She started selling her products at the Hout Bay, Noordhoek and Pinelands markets, getting there early to ensure a good spot which would make the stall fee worthwhile. For the future she’d like to have a large exhibition of her work in her house in Khayelitsha so that regular customers from different markets could find her in one place. Her dream would be to export products overseas.
Back in 2000 she was asked at a job interview to fill in the blank ‘Esther is……’ and she cried in response. Now, she doesn’t hesitate: ‘….stronger now….when I look at my life I tell myself I came from zero but I think I can get here…(points to a higher place) ….I think I can be a hero.’

Originally from the Eastern Cape, Noma has lived in Lower Crossroads for three years. With four children of her own and three foster children, ages ranging from 6-23, Noma has a strong motivation to find employment to put food on the table.
In 2006 she started making necklaces, scarves, earrings and brooches to sell, but realized that she needed a greater variety of skills to generate a decent income. This ultimately led her to join Mhani Gingi’s ceramics project in 2012.
Her ambition is to set up a studio in Lower Crossroads to impart skills to younger, disadvantaged women. Currently Noma is enjoying perfecting her technique of making soap dishes and small bowls, and sometimes finds it difficult to part with her products because she likes them so much.

Originally from the Eastern Cape, Mpumi now lives in Lower Crossroads with her husband and three children. A committed Christian, her main passion is gardening – she likes nothing better than to plant vegetables and see flowers grow from her efforts. She’s recently taken her love of working with her hands to the ceramics studio where, as a total beginner in stoneware, teacher Talia has branded her ‘a natural talent’. She’s currently learning how to make letters of the alphabet and herb garden markers in the shape of birds. 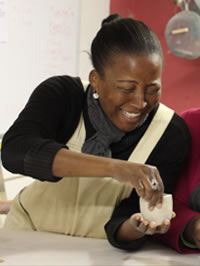 Ntsiki Katase was born in Cape Town in October 1979. She went to school in Gugulethu and finished grade 11. She never had the chance to go to tertiary level, but is hoping to have her matric. Ntsiki works three days a week at Fettle Fox Clay Design, a part of Mhani Gingi’s network. She loves what she is doing there and has developed a strong relationship with the other women she works with. Her dream is to learn more about pottery so that one day she can open her own shop. 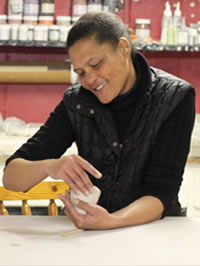 Monique Mohamed is 39 years old and was born and raised in Cape Town. Monique finished 11 years in school. She has always dreamed about becoming an artist, but never saw herself coming so far. She also has a passion for planting vegetables and flowers. Every Tuesday she goes to the church in Observatory where she attends the Sun Shide Leader for mothers and babies. She does needle work, beading and so much more there. She was told about Mhani Gingi and Fettle Fox Clay Design by her Sun Shide Leader. She is now learning how to make bowls, letters from the alphabet and more at Fettle Fox Clay Design. She finds it difficult, but loves it. She especially likes working and creating things with her hands. Her experience taught her to keep learning and to not stand still.

Siyasanga Mgoduka lives in Phillipi with her two children. She finished 12th grade and is now in level 5 at college. She is working at The Red, Gold and Green educare center in Phillipi township. Siya first heard about Mhani Gingi when they hosted a workshop in her township, and she has now been a part of the network for 4 years. She dreams about a brighter future for the children. Siya wants them to have a good education and stable life. She also wishes for a good future for not only the children, but also the staff at the educare center. She wants to see them grow and learn in a safe environment. She crosses her fingers that The Red, Gold and Green collection she and other women are selling will be more profitable in the future.