This gardening project is inspiring all who see it.

A sustainable community gardening project undertaken by LEAP Science and Maths Schools and Mhani Gingi in Zone 17 in Langa, Cape Town, continues to deliver hope and food to share with the surrounding community just a year after its establishment.  Both young and old benefit from the project which initially employed five beneficiaries from the area to create and maintain the garden.  Many other opportunities have arisen from the food garden and it inspires people who see it.

The project is funded as a corporate social investment initiative of Pegasys consulting firm.  The site of the community garden in Langa is leased from the Cape Town City Council by LEAP Schools, for after-school classes for learners conducted there over the past 20 years.  The garden project has now enabled the revival of a soup kitchen on the site to support elderly residents in the area.  They have been under added strain from the impact of the COVID-19 pandemic, according to LEAP Schools volunteer, Colleen Hodge.  Many other activities to emanate from the garden project include the baking of muffins and spinach pies which incorporate produce harvested from the garden.

Nosisa Nduna, co-ordinator, and Yonela Mnyombolo harvest food regularly from the garden. Many other activities have emanated from the project.

Nosisa Nduna continued as co-ordinator of the garden project during 2021, while Yonela Mnyombolo was able to be re-employed to support her, with funding from the Department of Social Development.  The donation of a growing tunnel by Pick n Pay Ackerman Foundation in August 2021 created more space for cultivation as well as creating a more comfortable and manageable environment in which to work.

So much has developed from the garden

To try and document the day-to-day life at the facility in Zone 17 would be very difficult, as so much happens at this space, said Hodge. “As the garden has developed so many other things have emerged.”

The soup kitchen is now an integral part of the week and provides nutritionally balanced meals provided by a sponsor.  Freshly picked spinach, beans and carrots from the garden are added to the meals.

Nosisa Nduna and Yonela Mnyombolo have learned to knit and have been approached by a person who is selling baby cardigans to be part of her project.

The donation of a new stove for the kitchen has allowed the women to resume the baking of muffins and towards the year-end they made 500 vetkoek for a charity. “The ladies are becoming fine cooks as they now make the most delicious spinach pie, obviously with the freshly picked spinach and spring onion from the garden.”

Africanised growers for vertical cultivation in the tunnel

“One of the biggest highlights was that Pick n Pay Ackerman Foundation approached Mhani Gingi to identify projects that deserved to benefit from a gardening tunnel. We had just the spot for the tunnel and this was installed by African Green Thumbs Growers – Fresh Life Produce.  We received this gift in August and already have harvested beautiful spinach and some lettuce,” said Hodge.  The foundation also funded The African Growers vertical plant containers for cultivation in the tunnel.

Harvest to sell and healthy meals from the garden

“We are managing to sell some of the (garden) produce outside Langa, but we have to keep the balance as we do like to support the community as we are very mindful that there is huge unemployment still and a healthy meal goes a long way,” said Hodge.

There is also a spekboom project underway, beading, knitting of blankets which are given to vulnerable children and elderly people, and other activities that take place at the site.

Nosisa Nduna, left, and Yonela Mnyombolo with fresh harvest from the garden which is used in baking.

“I share all this with you as the garden which started less than a year ago has created so many opportunities.  When people come and see the garden they are so inspired by what they see and they want to add value,” she said.

Many people in Zone 17 were struggling pre-COVID

“Covid has not been kind to the elderly pensioners who used to come and enjoy this space each week. We are so happy that it is now Level 1 and will be able to start the meetings again. We also hope to be able to have (more) food to share with the pensioners.

“At this stage the garden looks beautiful – waiting for a harvest of cabbage and spring onions and our continual successful spinach.”  The carrots and turnips are delicious to add to the meals.

“We had a wonderful opening of the garden where many of the stake-holders were able to attend. It was so good that Caroline Solik, from Pegasys, could share the moment with us, and Dr John Gilmour, Founder of LEAP Science and Math School, amongst others, and could share the spinach pie…..and a fresh garden salad,” Hodge said in a report.

“Many people in this zone were struggling pre-COVID.

“Children in this area still do not attend school every day so this puts a lot of strain on families, as well as not having a routine – (and) the fact that many children are fed at school.

“The project has enabled both Nosisa Nduna and Yonela Mnyombolo to be productive and they have learnt so much. Their children and families have embraced the garden as have so many people from the community.

“We are so grateful to Mhani Gingi – Lillian Masebenza, Dr. Earl Starr  and Tabisa Mahlathi for their continued inspiration and support and to Pegasys who planted this seed for us.  The garden project continues to be a ray of sunshine and we want to work hard to keep this alive.” 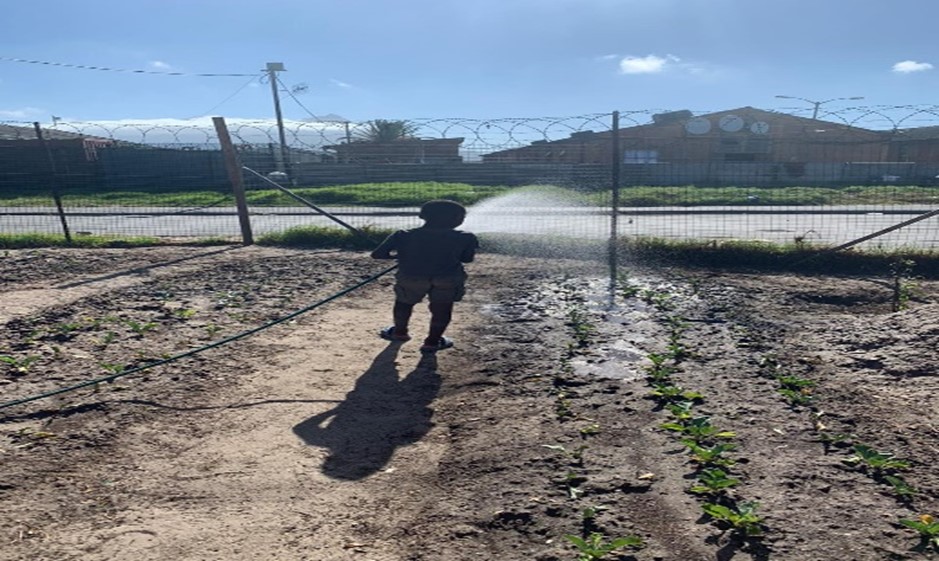 The community garden established on this site has brought hope and new purpose. 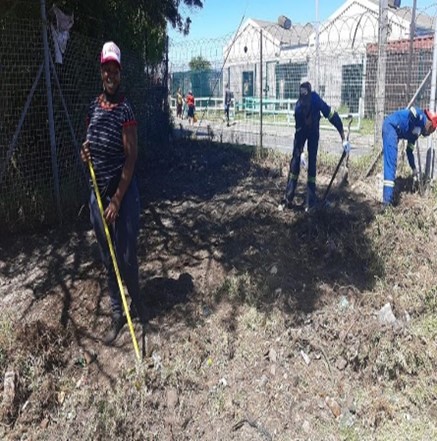 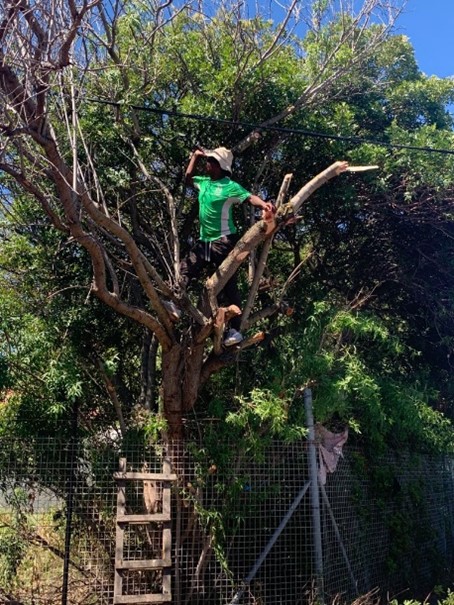 Clearing the site for the garden project.

The hard work of clearing the site began under the supervision of Mhani Gingi.  Fencing had to be moved and rubble and paving cleared.   Solomon Madikane, a board member of the Leap School and the founder of Realistic, assisted with the selection and appointment of five beneficiaries from the local community to work in the garden. Mhani Gingi was allocated a grant from the Department of Social Development in the Western Cape Province which provided a stipend for the beneficiaries for six months.

CA Wellpoints & Boreholes helped with the installation of a water well after some initial problems securing reliable irrigation for the garden. The funding from Pegasys covered the purchase of seedlings and fertilizer, management of the project by Mhani Gingi, as well as the water well and the costs of clearing the site.  Garden implements were loaned or donated 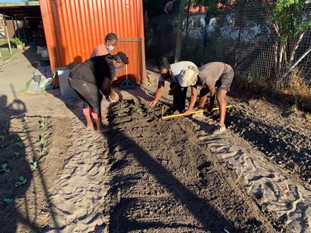 Beds being prepared for planting.

During December 2020, the garden was established.  The soil was prepared and the first vegetable crops could be planted.   Nomawabo Damsese, from the Mhani Gingi Organic Herb and Vegetable Seedling Nursery, trained the beneficiaries in plant propagation, how to prepare the soil, and care for the plants.  Seedlings of spinach, broccoli and cauliflower were planted. 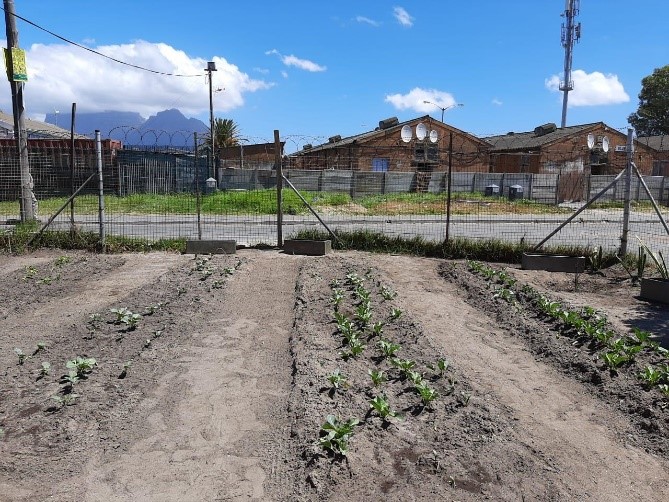 The garden was established during December 2020. 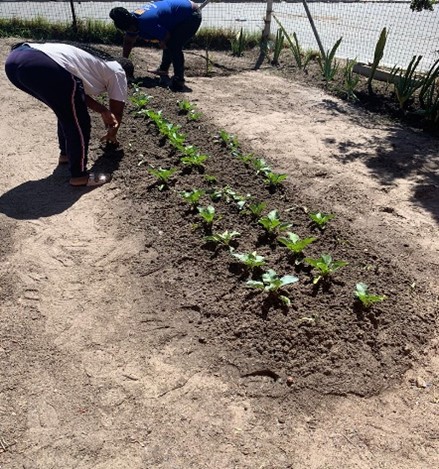 The first vegetable seedlings being planted. 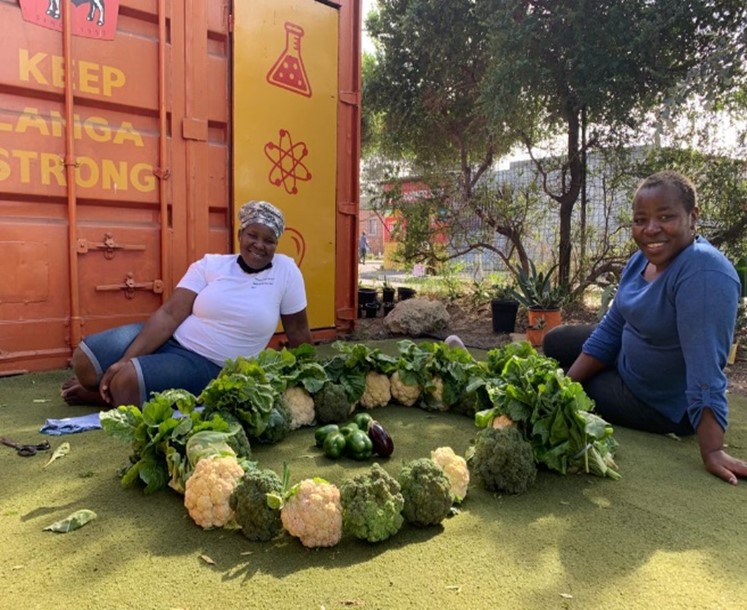 “During this short space of time the place has been transformed into a beautiful space and also energy. Thank you to Lillian Masebenza and Tabisa Mahlathi from Mhani Gingi for their wonderful support and guidance with the project, and to PEGASYS who initiated the project,” said Colleen Hodge, A volunteer for LEAP Schools.